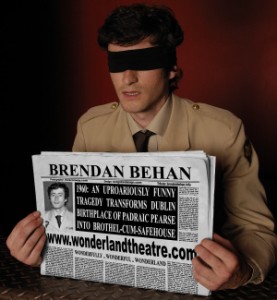 1960: Tonight rhe New IRA kidnapped a nineteen-year-old soldier as he was leaving an Armagh Dance Hall. The IRA declares that it will shoot hostage Leslie Williams, if their ‘Belfast Boy’ is executed at Belfast Gaol tomorrow morning.

Wonderland’s site-specific staging of Brendan Behan’s great tragicomedy transforms the birthplace of Padraic Pearse, the martyred leader of the Easter Rising, into the 1960s Dublin brothel-cum-safe house where the IRA hold Leslie Williams hostage – and where you can ‘sit up’ for the night with him. This historic Victorian terrace is home to fallen rebel heroes, homosexual navvies, catholic evangelists, pimps, whores, convent girls and decaying civil servants who are loyal to the nationalist cause. They entertain Private Williams with jigs and reels, romance, rock ‘n’ roll dancing, rebel songs and tales of Ireland’s glorious past, whilst the IRA guards wait for a reprieve from Belfast – or the executions of the coming dawn.

Wonderland’s staging of The Hostage took place from the 21st July to the 16th August 2009 at the James Joyce Centre, Dublin. 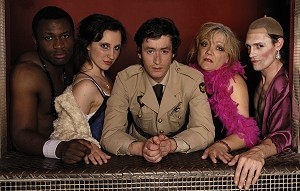 Listen to 2 songs from the show by Morgan Cooke

Credits: Music is by Morgan Cooke; Roseanne Lynch on Sax and Lyrics by Brendan Behan.

“Without any risk of overstatement, Wonderland Productions is a company that is really going places. A plucky, ideas-driven and indefatigable theatre group, they have had no easy access to conventional venues and have learned to improvise handsomely, staging their works in various site-specific venues.” –  The Irish Times

“Delivered with such exhilarating enthusiasm” – The Irish Mail on Sunday

“Terrific direction and choreography by Alice Coghlan” –  The Sunday Independent

“A worthy triumph of the imagination” –  The Sunday Times

“One not to miss” – The Independent