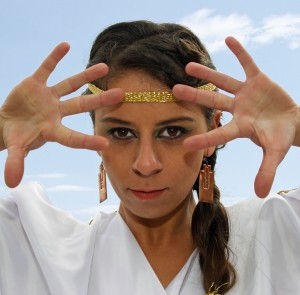 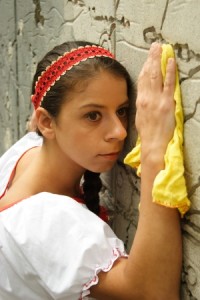 Sylvia’s Quest is the story of Sylvia Sylvana, a young Bulgarian archaeologist who works as a cleaner in your city, who must find her way home tonight. Sylvia shares her multiple worlds with you, her new friend, as she guides you through her labyrinth of secret streets and time portals – inviting you to dance with her ghosts, to taste black bread and sherbets, and to time travel back to Ancient Thrace…

This innovative promenade show uses cutting-edge radio technology, which enables you to listen, through headphones, to the sounds, voices and worlds which only Sylvia can usually see and hear, as you follow her through the streets of her labyrinth. This exciting technology has never been used in Irish theatre before, and it is why Sylvia’s Quest premiered at the Dublin European City of Science Festival.

Also performed as a work in progress as part of the Made In Temple Bar festival, July 2011. It was aimed at both an immigrant and Irish audience, and it was particularly encouraging to welcome over 60% of our audience from New Irish backgrounds at the work-in-progress showings.

“Wonderland’s latest offering continues in their tradition of ambitious and imaginative work…. Sylvia’s doubly redolent name, with its woodland and magical associations, is also linked to the name of her home place, and her memories are imbued with a vivid sense of its history…. Dimova, a diminutive actor, delivers a graceful performance requiring a variety of skills, vocal and physical. She interacts with members of the audience – always a potential minefield for either party – with both charm and confidence.”

to director Alice and performer Elitsa discuss the ideas behind the show with audience members in their post-show talk.