The Wonderland International Adult Workshop series was developed to offer Irish theatre professionals and students the chance to train in international styles of theatre, with directors and actors from other countries.

These directors were not resident in Ireland and so the workshops provided both workshop leader and actor with a rare opportunity for cultural exchange. The aim of the week to two-week-long workshops was to provide the student with a working foundation in the new style, which they could then build upon in their own work. Examples include Introduction to Clowning and Mime with Artus Chavez in 2006. 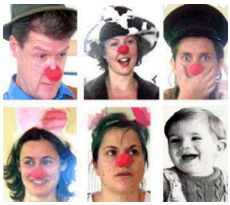 This was a fun two week introductory workshop,  introducing participants to the art of clowning and mime. Clowning is about wanting to be loved. We laugh at the clown to show our endorsement of him.

Our central goal was to discover our own personal clown, i.e. what there is in each of us which the audience likes so much. This is usually our most primitive, original self. Clowning is not about interpreting a role or a character; it is about sharing our inner-selves with our audience.

Our clown always wants to please. He/she is in a hurry to be loved by the audience, so cannot miss a chance. The clown is always alert, expecting, attentive, curious and sincere.

Clowns and fools are characters which can be found in different kinds of theatre. They appear in ancient Roman comedies, plays by Moliére, Shakespeare and in many modern texts. In recent years, the clowning tradition has flourished on the world stage. Directors and actors have understood the importance of the “fool” in the play and have studied new techniques to approach these rich and complex characters.

This clowning and mime workshop provided actors with sufficient tools to perform the clown or fool on stage. It was developed for actors, comedians, theatre practitioners and students – indeed, anyone who is interested in the art form.

The workshop focused on understanding the specific characteristics of a clown: its energy, personality, behavior, status and rhythm. As well, the workshop presented an opportunity to develop new characters, performance skills and to get fresh ideas for new shows.

During week one each students began finding their own clown persona through a series of improvisations. To play clown one needs to work out an extreme sensitivity and to be in a constant state of playfulness. The clown is always optimistic. S/he is always expecting something good to happen. Even when he is in shit he is optimistic. Actually the clown will make us laugh precisely at this moment.

In addition, the class explored different kinds of comedy routines and devised and wrote new ones. Mime was taught separately as a tool that can be used both in comedy and clown routines. Overall, the spirit of this workshop was playful and relaxed.

At the end of the first week, students were encouraged to present a short routine (whether using mime or not) for their co-participants.

The second week of the clowning workshop explored the world of the clown in more depth. Students worked on various comedy routines alone or in clown families. Objects, costumes and/or mime were used to write new comedy sketches and to improve the ones presented at the end of Week One. This created a great opportunity to show new ideas and discuss ways to improve them. Students were required to use mime in at least one routine.
The workshop culminated in a short showcase of clowning and mime numbers for a small invited audience of family and friends.

Artús Chávez-Novelo is a qualified theatre director with over 8 years of experience teaching drama and clowning. He accomplished his B.A. in Dramatic Literature and Theatre at the National University of Mexico. He trained in clowning with the American circus Ringling Bros. and Barnum & Bailey and toured with their show for a year. Most recently, he accomplished a MFA in Theatre Directing at Middlesex University, London. He has directed and trained actors and clowns in various countries, including Mexico, the USA, Thailand, and most recently Malta and Israel.

Feedback from the students of ‘To Play Clown’.

This is how the students of our introductory clowning workshop To Play Clown with Andreu Segura, responded to our confidential and anonymous questionnaire at the end of the course.*

What did you most like and dislike about the workshop?

Student One
“I loved being surprised by what clowning actually is, it’s tragic, emotive, very funny and quite beautiful. It was a whole new world of theatre for me and a great challenge too. Ultimately I felt it was some of the best training I have received as an actor, as it made me connect with the audience with sensitivity, alertness and above all concentration. That was the centre of the workshop learning to simply be on stage and to be at one with the audience. My favourite thing was being a dancing clown cowgirl.”

Student Two
“I joined the workshop to face my fears and accept myself as a performer and thought this workshop would be the right place to start, and I have to say it wholeheartedly was. The teacher made the workshop for me, he’s patient, charming, positive, encouraging, warm, generous and fabulous.
I loved being a clown, it’s honest, raw and fun. I also loved spending the week laughing at other people’s clowns, who doesn’t want to laugh? And most of all I loved wearing my red nose. The only thing Wonderland should change is not giving us so many chocolate biscuits, I got fat!”

Student Three
“The one week workshop was too short as I fell in love with clowning, and I definitely want to continue the work with Wonderland.”

Student Four
“I joined the workshop to explore my performance skills and to find out about the clown that’s been living inside of me. And I did. I liked the way that each student was given a lot of time and attention. I loved the variety of exercises and games that we played and the different mix of people.
There was nothing I didn’t like!”

“I liked all of the workshop and can’t say I disliked anything, and particularly liked the major/minor clown exercises and the very important leaders with their enthusiastic followers games. I took the workshop as I hoped to gain an understanding of how clowning is distinct from other theatrical styles and certainly felt that my expectations were met. Overall I thoroughly enjoyed the week and the camaraderie and trust in the group was fantastic. Thanks to everyone in the group and to Wonderland.”

*All the students have given written authorisation that Wonderland could publish their comments on this website. This transcript is unedited and all their comments are included here.